Ohio Lt. Governor Jon Husted, who serves as Director of the Governor’s Office of Workforce Transformation, today announced the results of the May round of TechCred, which will provide the opportunity for Ohioans to earn nearly 4,000 tech-focused credentials. This most recent round marks a TechCred milestone, as the program has officially reached and exceeded the goal outlined in the most recent state budget to fund 20,000 industry-recognized, tech-based credentials each year.

“With these results, we have exceeded our goal of funding 20,000 TechCred credentials each year, highlighting the continued need for more technically skilled workers, specifically in the manufacturing industry,” said Lt. Governor Husted. “Technology and technical job skills are becoming more important for Ohio’s economic future each and every day, and TechCred is a great way for businesses to keep their workforce competitive, while helping Ohioans upskill so they can earn more and grow in their careers.”

“This milestone is important because it means more workers are learning new skills, which allows businesses to improve processes and products,” said Lydia Mihalik, Director of the Ohio Department of Development, which administers the program. “This is a critical component of the DeWine-Husted Administration’s work to strengthen the Ohio economy.”

With the approvals announced today, a total of 1,891 Ohio employers have been approved for funding through the TechCred program, supporting the earning of 44,777 tech-focused credentials by employees.

“The numbers make it clear – there is an ongoing need for employers to upskill their workers for continued success and growth,” Ohio Department of Higher Education Chancellor Randy Gardner said. “The TechCred program remains a vital part of a thriving economy in Ohio and is a win-win for all involved.” 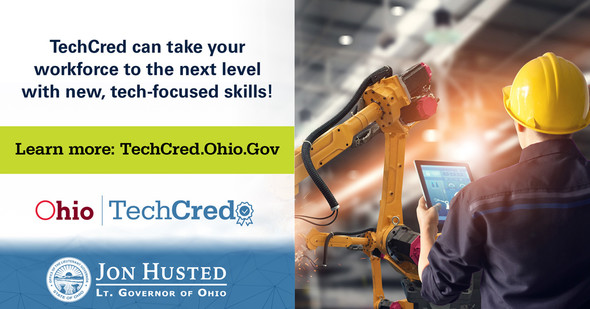 The current TechCred application period opened on July 1st and will close on Friday, July 29th at 3:00 p.m. Businesses with employees who have completed their approved TechCred training should complete the reimbursement process at TechCred.Ohio.gov.

Learn how TechCred can benefit your business at TechCred.Ohio.gov.